(This is a revised version of a post originally written for Veterans Day in 2011. The meaning still applies.) On Veterans Day, a reminder of what the day once meant and what it should still mean.

One of the most tragically senseless and destructive periods in all history came to a close in Western Europe with the Armistice –or end of hostilities between Germany and the Allied nations — that began at that moment. Some 20 million people had died in the fighting that raged for more than four years since August 1914. The formal end of the war came with the Treaty of Versailles in June 1919.

Today, it is important to recognize the role of that treaty and the war in the rise of some of the most murderous dictators in history. That history is told in my new book, Strongman: The Rise of Five Dictators and the Fall of Democracy. 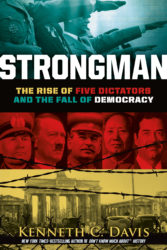 Besides the war casualties, an estimated 100 million people died during the war of the Spanish flu, a worldwide pandemic that was completely linked to the war and had an impact on its outcome. That is the subject of my recent book, More Deadly Than War:The Hidden History of the Spanish Flu and the First World War. The date of November 11th became a national holiday of remembrance in many of the victorious allied nations –a day to commemorate the loss of so many lives in the war. And in the United States, President Wilson proclaimed the first Armistice Day on November 11, 1919. A few years later, in 1926, Congress passed a resolution calling on the President to observe each November 11th as a day of remembrance:

Whereas the 11th of November 1918, marked the cessation of the most destructive, sanguinary, and far reaching war in human annals and the resumption by the people of the United States of peaceful relations with other nations, which we hope may never again be severed, and

Whereas it is fitting that the recurring anniversary of this date should be commemorated with thanksgiving and prayer and exercises designed to perpetuate peace through good will and mutual understanding between nations; and

Whereas the legislatures of twenty-seven of our States have already declared November 11 to be a legal holiday: Therefore be it Resolved by the Senate (the House of Representatives concurring), that the President of the United States is requested to issue a proclamation calling upon the officials to display the flag of the United States on all Government buildings on November 11 and inviting the people of the United States to observe the day in schools and churches, or other suitable places, with appropriate ceremonies of friendly relations with all other peoples.

Of course, the hopes that “the war to end all wars” would bring peace were short-lived. By 1939, Europe was again at war and what was once called “the Great War” would become World War I.  With the end of World War II, there was a movement in America to rename Armistice Day and create a holiday that recognized the veterans of all of America’s conflicts. President Eisenhower signed that law in 1954. (In 1971, Veterans Day began to be marked as a Monday holiday on the third Monday in November,  but in 1978, the holiday was returned to the traditional November 11th date).

Today, Veterans Day honors the duty, sacrifice and service of America’s nearly 25 million veterans of all wars, unlike Memorial Day, which specifically honors those who died fighting in America’s wars.

We should remember and celebrate all those men and women. But lost in that worthy goal is the forgotten meaning of this day in history –the meaning which Congress gave to Armistice Day in 1926:

to perpetuate peace through good will and mutual understanding between nations …

inviting the people of the United States to observe the day … with appropriate ceremonies of friendly relations with all other peoples.

The Library of Congress offers an extensive Veterans History Project.

I discuss the role of Americans in battle in more than 240 years of American history in THE HIDDEN HISTORY OF AMERICA AT WAR: Untold Tales from Yorktown to Fallujah (Hachette Books and Random House Audio).